Well it’s been over 2 weeks since I made an update on the blog. Partly because I had nothing new to add ( yes I know, coming from me it’s surprising) and partly because the boss (Murielle) was suffering from ‘Man flu’ and she didn’t feel like doing anything else after her working day had finished… So it’s been booooring ! Commute to work and back. Nothing else!

But today… Woohoo, Murielle must have been feeling guilty for neglecting me and roped Chris in this afternoon to help her bring a bit of glamour to the inside of my cab.

She has taken away the rubber mat that I had when I came to live with her and replaced them with a  black carpet flooring with red trim…. Smart or what???  When she ordered the mats she had asked to have my name embroided on the side in red, but she received them without the embroidery. I’m not impressed, I nearly threw a tantrum…. but then these mats are still better than the old rubber one that was trapping water underneath and promoting rust production, so I played nice and didn’t do anything naughty. Would this mean that I am starting to grow up? I sure hope not !!!

When we went to France in May, Murielle had bought some new flashy fireman red seat covers… well today, Chris took my front seats off, brought out a big box of mini rubber bungees and told Murielle that she needed to help… and then he said, did you get the felt to cover the foam? The reply was a blank stare and ‘Off course not darling, how much do we need?’ so off they went to the garden centre to get some hanging basket liner to put over my foamy bits…  Guess what … They didn’t take me! They drove Zebedee (the ZX) instead, Zebedee has been relegated to parking on the road outside the house since i’ve arrived and taken the prime parking spot outside the front door. Needless to say she is not happy with me and couldn’t help but rubbing my nose in it !

Well they soon came back and started to work on my seats, Murielle did the bungees for the driver seat and Chris all the others… Well he has more practice than Murielle for this and could do it with his eyes closed. I think it’s fair to say that he did 80% of the work and Murielle 20%.  Since my seat frames are old, all didn’t go as planned, Murielle broke a nail, they both got covered in grime, and…. one of the metal rods inside the canvas was broken, Chris was wondering where he could get one to replace it, Murielle suggested a metal coat hanger and this worked a treat, she’s not just a pretty face after all !!! She then had to rummage in her sewing kit for a big needle and thick cotton thread to sew the felt to the seat and stop it from bunching off. It’s fair to say my front seat are holding up but  showing signs of wear; but, surprisingly enought my back seat is in very good nick… (I guess it hasn’t seen enough action).

And now, the white “false leather seats that makes your bum sweat in the summer” have been replaced with gorgeous red comfy fabric ones.

There was a funny moment when Murielle (who is not very tall) got stuck in the boot with her feet in the air when making sure my back seat was properly locked back in place. Unfortunately, no picture of this comical sight as the photographer was stuck in the boot (shame).

Murielle say the seat doesn’t sag as much now, the new bungees give her bottom more support, and Chris said he his higher on his seat now.

Imagine; if they hadn’t done it, I could have made all the bungees snap at the same time and leave them with they butts on the floor. Now that would have been a fun thing to do as I love to cause mayhem ! 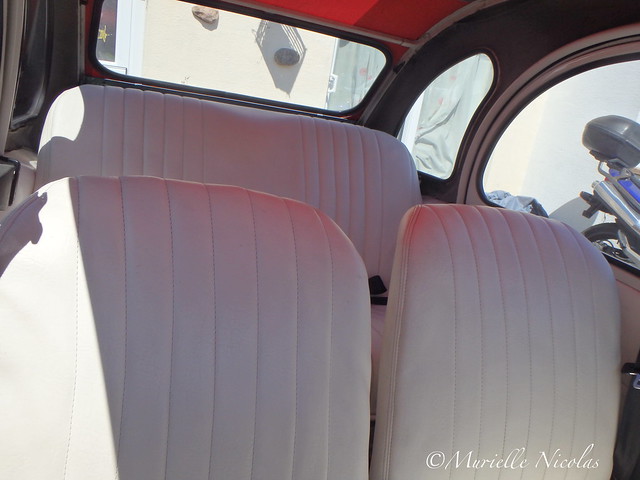 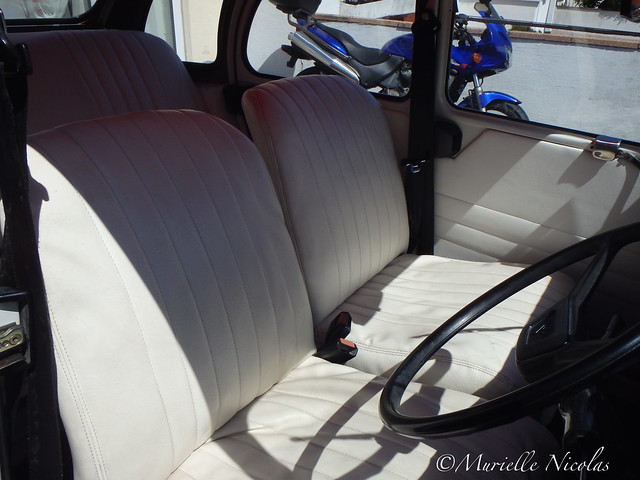 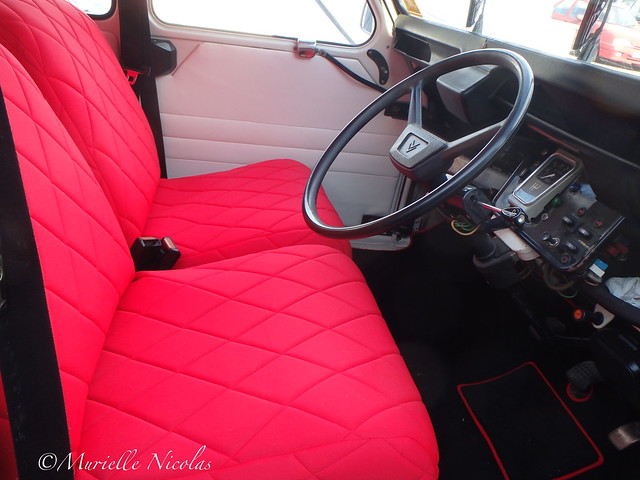