Well that’s it I moved to Jersey, I feel a bit rusty, and apparently I need to get Jersey registration plate before being allowed on the road.  Murielle made an appointment at the Driver’s Vehicle Standard, 3 weeks to wait before the inspection….

Before the inspection Chris took me to his garage to put me on the ramp (going up and down was fun),  he got me some new tyres, new King pin, had a look at my innards (Yuk) and made sure I was purring like a kitten (well, almost) so I’d be good and ready.

Then the day came, I couldn’t wait to be allowed on the road again, like a puppy on a leash… Beside I wanted to know how Murielle would manage the gear sticks as she’d never driven the likes of me before… Chris thought it was hilarious and was grinning from ear to ear, she is such a “know it all” that he was relishing showing her how to do something …

I couldn’t believe it, I failed…. The man in the overall said I has an oil leak… An oil leak?!? I’ll have you know I am clean Sir,  I don’t spit oil on the road! Murielle had to make another appointment for another inspection and submit some proof that the work had been done… Well she is married to the mecanic that repairs most of the 2cv’s on the island and deals with the paperwork… So that was easy, and all above board of course.

Second inspection date… I am roaring to go, Murielle actually drove me there, and showed all the paperwork to the man in the overall who bent over, glanced under my chassis and said that I had passed… What was all the fuss about?

Did I tell you that Murielle fancies herself as an amateur photographer? No? Well she does, so she decided to take me round and photograph me in different places. Good job the house hasn’t got a garage or my hood would get too big for it …. Mind you I am a handsome beast ! 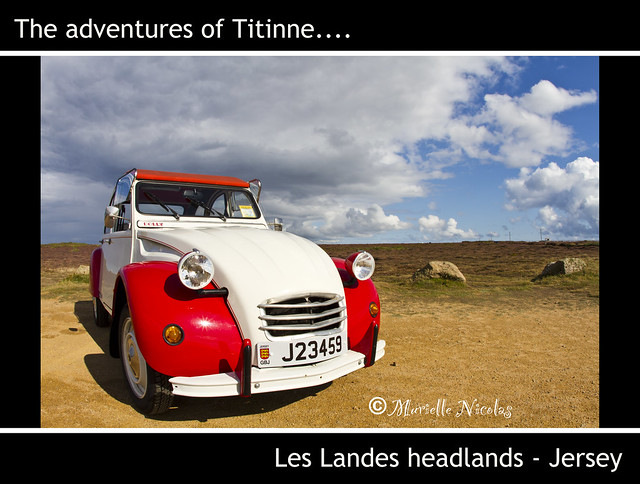 Now , as I understand it, Murielle NEVER washed a car in the 25 years she had been driving…. but hey, i’ve started her training and i get a wash and wax every other week end, she is even using elbow grease… Result !

I think she must like me a lot to put all that effort into me.  I don’t know why though because, being French I have a bit of the Gallic temperament and I sometimes refuse to start in the morning (even though  I have an electronic ignition),  I have made her late for work a few times. Chris got fed up with my morning temper tantrums, told me there isn’t a garage to keep me warm, “deal with it” and changed the coil… Duly chastised, I now start on the button every morning.

Bearing that in mind, whilst i’m still trying to decide whether they will be the right owners for me I decided to try another trick…. Once warmed up, when I came to a traffic light,  stop line or had to stop in traffic, as soon as i was put in neutral, I decided to stop the engine! Oh that was funny, Murielle had kittens behind the wheel, especially when there is a queue of traffic behind her (hi hi hi). This managed to confused Chris for a little while too. He cleaned my carburetors but I carried on…. All it was was that I was letting very minute particles escape from the paper filter and causing a blockage further up, cutting up the engine. I am an Evil Genius !  But Chris is a god when it comes for 2cv mecanics and the spoil sport didn’t take too long before realising what I was doing and putting things right. 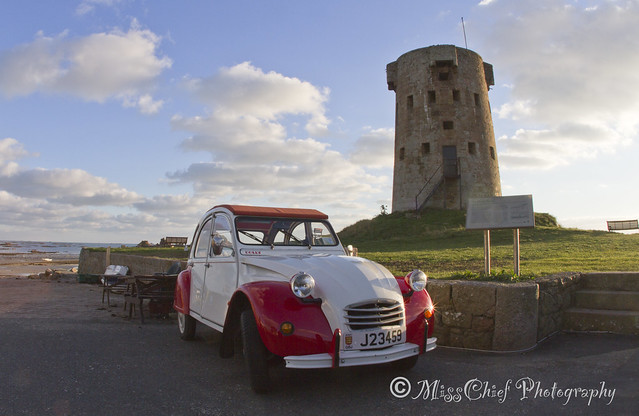 Chris having sorted my engine (he tinkered with too many things under the bonnet for me to list here), Murielle decided to send me away to a beauty parlour, to sort out my age spots… you know the rusty bits that appeared on my body. I had a few around the doors gutters, the front vent, back bumper…  The man at the refurb shop was very nice, no more than a month he said and about £800. So she did, she left me there, abandonned me ! Like a dog in a kennel, she didn’t even look back….

2 months later, just before Christmas, she got the call that I was ready for pick up, and the price of the work had gone up to £1800… In the meantime, I had missed out on a trip to Mont St Michel at the end of October, Chris and Murielle travelled in the Citroen Pluriel… fickle owners !