I knew something was up yesterday when Murielle took me away from my tent to park me in front of the house. She finally decided to clean me! She has grown lazy in the winter months and now that I sleep under a tent and come out when the weather is not too wet, she doesn’t bother with my weekly wash anymore. Not fair, I’m sure she washes more than once a week, so why do I have to wait once a month?

Well it was pay back time, I was covered in ground dust, serves her right! It took her over an hour to wash and dry me, but give the girl a sticker, she did restore my shine! I was sparkling, boy it felt good to be gleaming again! 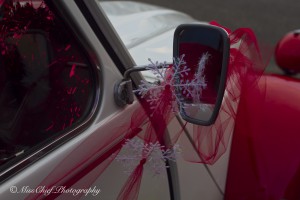 Hang on, what is Murielle up to now? she got these rolls of red and white, tulle, a pair of scissors and fake snowflakes… What is going on? I am getting a make over, all door handles covered (even the boot one) with frilly bows with snowflakes… Is she trying to turn me into a girl? I’m NOT a ballerina for goodness sake! I think my human has lost her marbles…. (Well I’m not sure she ever had any to start with but I am willing to give her the benefit of the doubt). 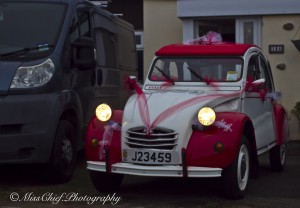 The camera came out, she took a few shots, then back in my tent…

I hardly slept a wink, wondering what this was all about, I look ridiculous for goodness sake I hope she doesn’t expect me to go out like this!

It’s the morning of 6 December, it’s Sunday, so I’m not expecting to go out too early, the Sunday run is usually a quick trip to Dina’s for coffee and back, around 9:30. So imagine my surprise when the door of my tent is pulled open at 8am to reveal… A scary sight! My human has gone completely mad indeed! What on earth is she wearing?  Red and white hat, white top, red skirt and stripy red and white stocking! she looks totally ridiculous, fashion sense nil, zero… My wheels nearly fell off with shock ! I think she got up too early and got dressed in the dark, there can’t be no other explanation! 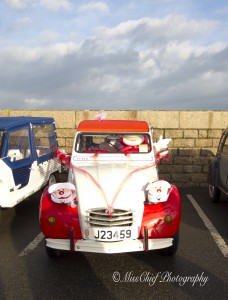 Off we go, but hang on, this is not the usual route, why am I stopping there? Outside Royston South’s house? Off she goes and come soon comes back with a giggling Royston and not 1 but 2 big balloons in the shape of Santa Claus… The smaller one is squeezed onto the passenger seat, but it’s so fat, the seat belt needs to go around his feet. The window is opened so it can stick his hand out and wave at people ( I am going to die of embarrassment, not only do I look like a French tart, but now I am carrying an oddly dressed human and make believe passenger, someone save me pleeeeaaaase ! ). The other Santa is too fat, It can’t safely go inside me (yes I was squeezing my insides, but don’t tell Murielle). I thought I got away with it, but oh no, they just beheaded it and put the head on the back seat!

Off we went, a quick stop at Dina’s and en route to St Catherine, where I was met by a bunch of silly dressed humans and my sisters, (I had forgotten it was the first Sunday of he month, club day). My poor sisters were also wearing silly outfits, and I think the green and white Dolly got the best disguise with her reindeer antlers and flashy red noses. 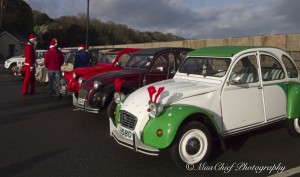 Apparently, it was the 2cv club Christmas outing, we had to suffer the humiliation of carrying our silly dressed humans for longer than usual as they had decided to go from one end of the island to the other…

I think that there will be pay back to be had, sooner than Murielle expects!