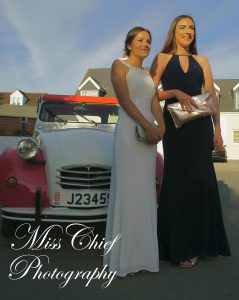 I was proud as punch when Avena asked Murielle if I could take her to her prom. It is not every car that get asked that question, but of course I am NOT every car, I am me, small, quirky and adorable 😍! (Just like Avena really)

I waited impatiently for Murielle to get back from work, hoping she would have the time to give me a good clean and polish, but no such luck. Murielle got dropped back from work, threw off my cover, tossed the keys at Chris and asked him to start me up (as if I was going to let Avena down and play up!, what does she take me for? a temperamental brat?!?). Meanwhile, she shot in the house to grab her camera bag and she even didn’t bother getting changed and brushing her hair, I had no chance to be spruced up. It’s a good job that I make an effor to keep myself clean and tidy!

Murielle drove me round to John & Hilly’s house to pick up Avena, for once, I didn’t mind not being the centre of attention, both Avena and Phoebe (her friend) were looking very lovely in their long dresses, with make up on and high heels…. Proper ladies (Murielle should perhaps have made notes for future reference?).

I had to wait a little bit outside as there were lots of pictures being taken of the young ladies in the garden, with John being more than slightly emotional and turning into a bit of an obsessive photographer…. Well, what can I say? Proud daddy, he is excused ( for this time). Everyone knows that I don’t like waiting, but I refrained from hooting a quick “hurry up, I’m lonely”. After all, it was Avena’s and Phoebe’s evening. 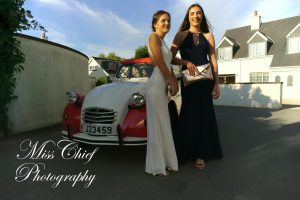 When the girls finally came to see me, I insisted in having my picture taken with them, they were looking so good, they would not put me to shame 😇 and for once I didn’t mind being in the background one little bit, perhaps I am growing up a little? Nah, life would be too dull if I grew up 🙄.

After a few pictures, the young ladies climbed aboard, had to fiddle to close the doors, and giggled nervously on the back seat. I burst out with pride when Avena said she had forgotten how cool I was … Anytime you want a ride Avena, I will be there for you… I can be your wedding car one day too if you want 😍. 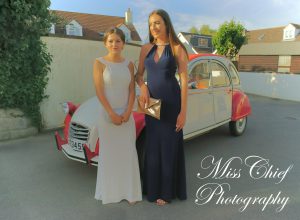 As I drove along to the hotel, big HUGE posh cars where coming on the other side of the road, having dropped their charges at the entrance of the hotel for their big evening. I waved at an antique car who was coming away from the hotel, the poor old thing must have been at least 20 years older than me! We had to queue behind a rather dull looking silver jeep before being waived forward by the ushers….

A very well dressed young man opened the door for Avena and Phoebe to get out, just as well as they were wondering which lever to pull to get out… I will have to show Avena one day how this is done.

My charges, eventually stepped out, leaving me to go home under thundering applause from the crowd gathered to have a look at the young persons going to the road. I hope they enjoyed their evening, it was my pleasure to drive them from home to their venue 😄