Good morning campers, it’s been a while since I’ve slept outdoors, and I found it a bit chilly last night, but amazingly enough, the air stayed dry, no dew on me this morning… Less chance to turn into a rust bucket again.  My humans seems to have had a good night, I could hear them happily snoring away.

After having having their cup of tea for Murielle & coffee for Chris, they decided to go and have a look at the main area of the meeting and left me here by myself! I would have thrown a tantrum and blew my horn, but I think it was too early to disturb the other campers… Anyway, at least they’ve let me park next to the handsome Elmer 😍.  But then,  when they came back, they had the cheek to tell me all about the flea market! 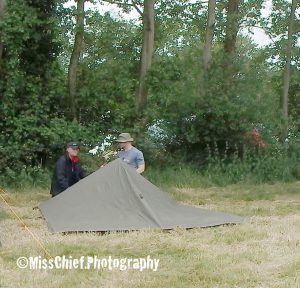 Then Bruce joined my owners and pitched his tent for the night, well if you can call this a tent, I must admit that I sniggered (a lot) when I saw it and have to admit that it drew a few people around to look at it, even if they were shaking their heads with disbelief when going away… Mind you with a dad like Chris and step-mum like Murielle, the kid had to end up with whacky tendencies too… Apples don’t fall too far from the tree after all 😜. 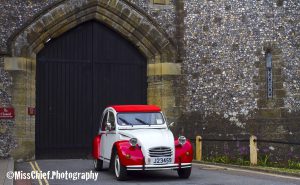 I wanted to stretch my tyres a little so after lunch I bundled my 3 humans in the car, put Chris behind the wheel, Murielle in charge of the GPS (not sure that was my brighter idea) and Bruce on the back seat and we took a trip to Arundel. I’d heard there was a nice castle to look at there. Unfortunately I wasn’t allowed near the castle and had to stay in the car park adjacent with the commoners… The only bright side is that my humans didn’t get in either. They arrived too late (4pm) and didn’t fancy paying £9 each just to see the gardens as they wouldn’t have time to see anything else before closing time. They decided to walk around the rampart instead and have a quick nosey around the town.  I did get my picture taken at the entrance of the castle to prove that I’d been there though, just because I am fabulous !  😜 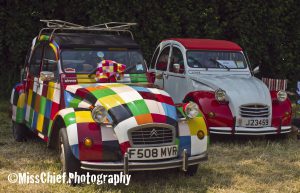 I parked myself next to the lovely Elmer and we got cosy for the night whilst the humans went to their drinking hole (beer tent) in the main field to enjoy the evening entertainment. Mind you they were back an

d tucked into their duvets by midnight! light weights….  Relieved that my brood was now back under my wings, I fell asleep. Only to be rudely awakened by what sounded like “battery hens on speed” (to paraphrase Marion) some very drunk unladies cackling like mad loudly and banging on the door of a very swish looking motorhome…. Of course, my humans got awaken as well (except from Bruce who needs a bomb blast to wake up) and it too me ages to get them back to sleep… Not funny, they need lots of beauty sleep or they get scary in the morning!

The rest of the week end was spend chatting with other cars and chilling out with Elmer, we had such a lovely time, I will find it hard to leave him behind when I get back to Jersey….  😍