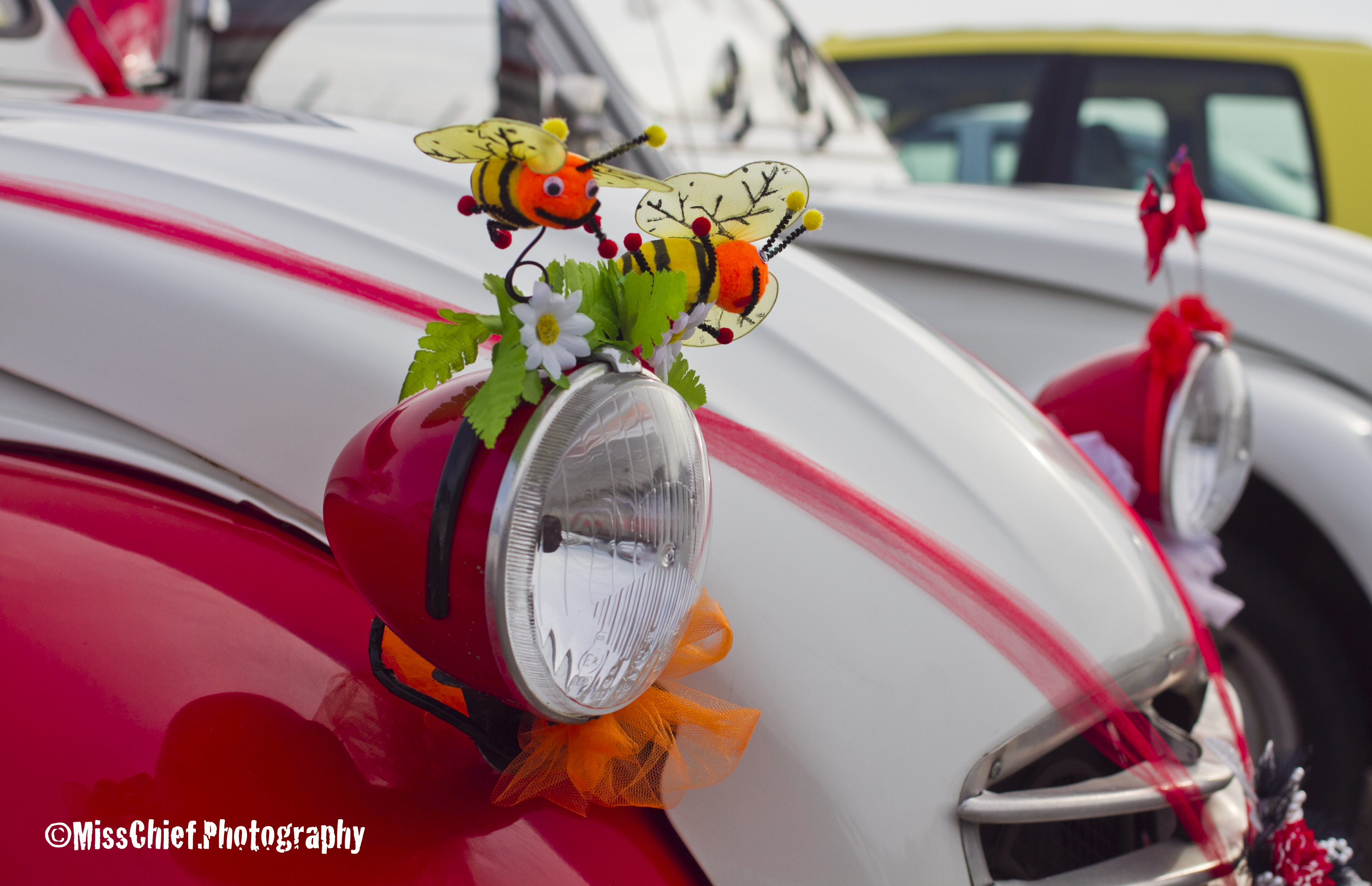 I’ve been a bit lazy (very unlike me) and held on from telling you about the fun club run I had on Sunday. With the smell of spring in the air, well I know it is as the pollen from the pine tree is starting to leave a thin yellow blanket on my lovely bodywork. I’m gonna have to watch that it doesn’t get up my air filters or I might start sneezing…

Anyway, I digress, not sure if you’ve noticed but I do like a bit of a digress every now and then… 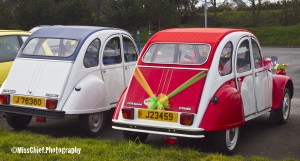 I didn’t get any warning that the run was about to happen, I usually get a nice rinse, wash.  rince & dry treatment the day before the run but it was raining on Saturday. So Murielle decided to be lazy and skip on my treatment 🙁 . I did find it strange that she came round with the chenille mitt to give me a dry sponge bath and wipe all the pollen off me…. This should have been my clue! It tickled !!! Those chenille bits ended up in very strange places indeed <blush>. 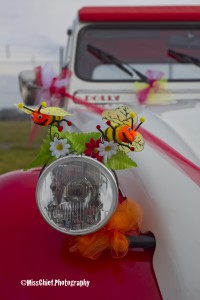 Sunday morning, it started very grey with the clouds spitting at my shelter! How rude….  Murielle came to see me and within 10 minutes I had ribbons fitted everywhere she could think of. I do sometimes wonder what goes on in her head. Not happy with turning me into a gaudy scarecrow, she added weird things on my lovely headlamp… I worry about what this woman is going to do to me next… I half expect the men in the white coats to come and get her any time now! 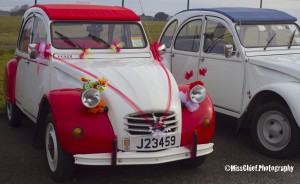 Half way to the airport, I remembered that it was club run day, Yippee !! at least my sisters will look silly too, it won’t be just me …  But, hang on, Snow White (well I had to give her a name since her owner hasn’t) is already in the car park of the Aviator cafe, and she is naked! No finery on her … uh oh, me thinks Murielle has set me up! And I hang my headlights in shame for looking like a scarecrow. 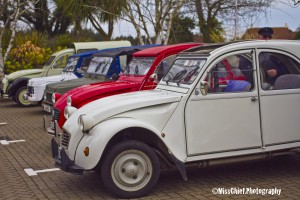 The Meharis gang arrived (a new handsome green one and the beautiful Cassis), minus Noddy who is on his hols… no spring decorations there either…  Camille & Emmy arrived too, as naked as Snow white, I felt like a fully clothed streaker at a nudist football match ! I am starting to want the ground to swallow me whole, especially as people are starting to point at me. Haven’t their parents told them it was rude to point? and laugh to? It’s not doing any good to my self esteem… I know Scarlet has been a dirty sleep out for the last 2 nights and since she didn’t go home, she won’t be decked out either…  Finally Celeste arrive and it looks like her owner is as mad as mine, she looks like she has been off-roading in a field of daffodils, she has some on her bumper and yellow ribbons decorations. She does look as silly as me (phew). Of course Murielle & Jo think we are beautiful, but then they need their heads examined !!! 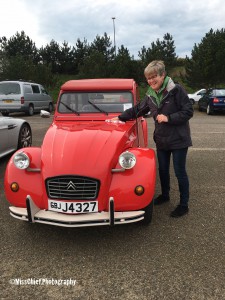 Well, Scarlet arrived ‘sans’ decorations, (unless you count the seagull poo splattered on her roof a decoration), she was a red and white Dalmatian (he he he, that’s teach her to be a dirty stop out!). She also forgot to bring Molly, our club mascot, and had left Ben & Debbie behind too! Thankfully, she was carrying Helen, at least she remembered to bring a human with her. I had to look when Murielle and Jo started to laugh, Helen had taken a hankerchief and giving Scarlet a quick last minute dusting… a little bit late may be? I wonder what Ben would say? 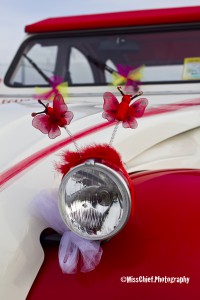 10:15 sharp, we left, Emmy took point, followed by Snow white, then me, then Camille, the meharis, Celeste and Scarlett. I must say, Peter who was driving Emmy took us to a lot of green lanes and I didn’t get much faster than 15 mph (speed limit). I soon realised that something was wrong with my Human. She was wriggling on my comfy seat and couldn’t settle. After 20 minutes in the ride, she started muttering and saying, “come on, a bit faster please, I’m not gonna make it”. I was wondering what she was talking about as I was the one doing the hard work, driving her round! Since she was so grumpy, I made sure not to miss any pot holes and area that would shake her a bit! 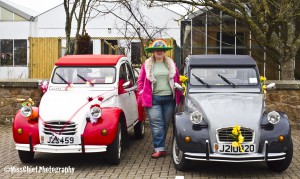 Going through St Martin, Murielle went mad with the horn, I was wondering if she was trying to urge Emmy on,  but then I realised with were passing Stacey’s house where a sick 2cv is recovering before being allowed to come and frolick with us. By then, Murielle is gritting her teeth, and as we arrive at Ransoms, parks me, grabs her bag and runs away from me! I don’t stink, honest! Murielle just needed to go to the bathroom, and apparently, she wasn’t the only one as Lynne had beaten her to the ladies…

Celeste felt sorry for me and came to park next to me whilst the ‘nudists’ parked opposite us and hada good laugh at our silly costumes, well we’ll show them next time!

Humans went in to get food and water, and an hour later, we dispersed and went  back our own way. I followed Camille for a while, as she lives close to me, but then took a different track in St John. Another few weeks and we’re meeting again 🙂 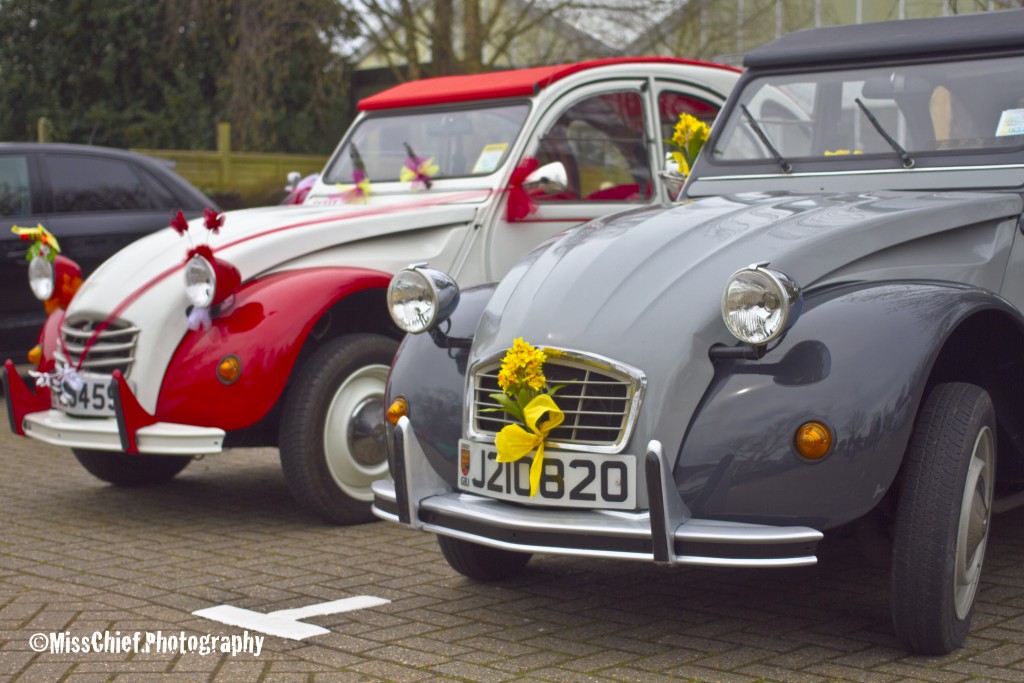