It’s Sunday and it’s the first Sunday of the month, so why am still parked in the so called garage? AND, I haven’t been cleaned for ages either… What is going on? Is Murielle on Strike? She has no time for me now she has started her new job. Since she is too tight to pay for parking in town, I’m left to mope around on my own. The only thing keeping me company is Chris’ new canoe, so the conversation gets boring very quick, as if I’m going to go and take a bath in salty water to see if I can float and go faster than him!!!! 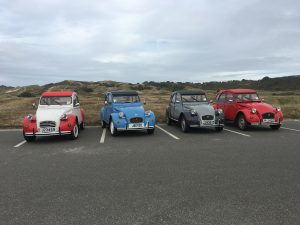 Oh but look like I’m going out after all, and it’s nearly 5 in the afternoon, I bet I’ve missed my sisters 2cv meeting as it’s usually held in the morning.  I am so cross with Murielle that I refuse to start, I wait exactly 5 minutes of key turning and engine cranking before I start to splutter and decided that I want to go for a spin after all…  Anything is better than letting my wheels turn into squares. 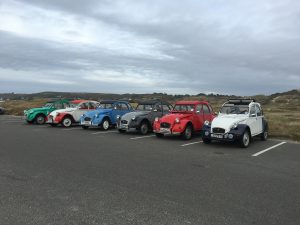 So off we went, down la Pulente hill, and I didn’t even make it to the Splash car park as I spotted my besties Celeste and Scarlet parked at Le Braye with Celine who I hadn’t seen for a few months…  I cornered into the car park and parked next to them ready for a good gossip session. I actioned the eject buttons and spat Chris and Murielle out of my cabin and they joined the humans for a drink and a chat.

Emmy joined us up a little while later, followed by little mule that I hadn’t see for a very long time, I was in fact wondering if she was still of this world or if she had ended up in the big crusher in the sky!

The too quickly, it was time to go back to my boring garage, no long drive led by Stuart this time, last month I thought Murielle was going to spit her dummy out of the pram as she had me doing so many hill start (that she hates doing). It’s a difficult balancing act juggling the pedal, gear stick and handbrake with her short legs and arms (I had great fun watching her).

On the way back though, a little bit of excitement, some newish cars driven by senior citizens had decided to kiss each other head on their front bumpers. I had to stop to let the ambulance crew assist even though everyone was out of their cars and looking ok. And then a sexy police cars came careening down the hill, shortly followed by a buff police 4 x 4 flashing its blue lights at me and crooning with its siren… I was starting to feel popular again. But Murielle being a spoil sport took me back home so no flirting with the law today 🙁

Oh well I’m off to sulk and mope back in my garage… until my next outing! 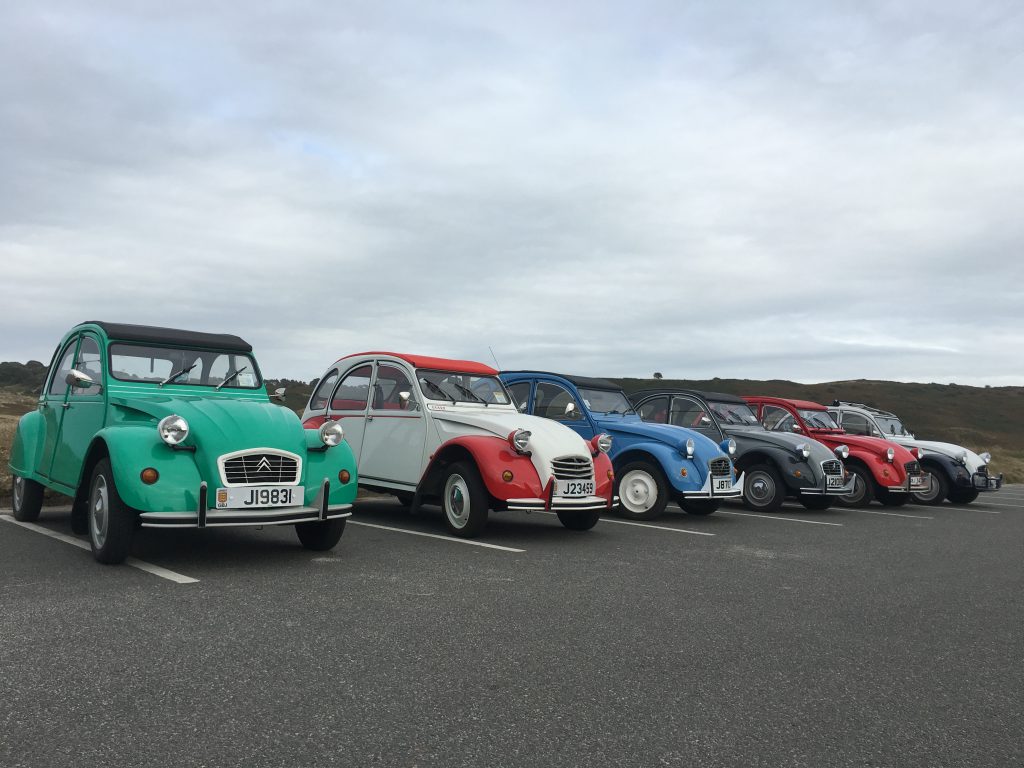