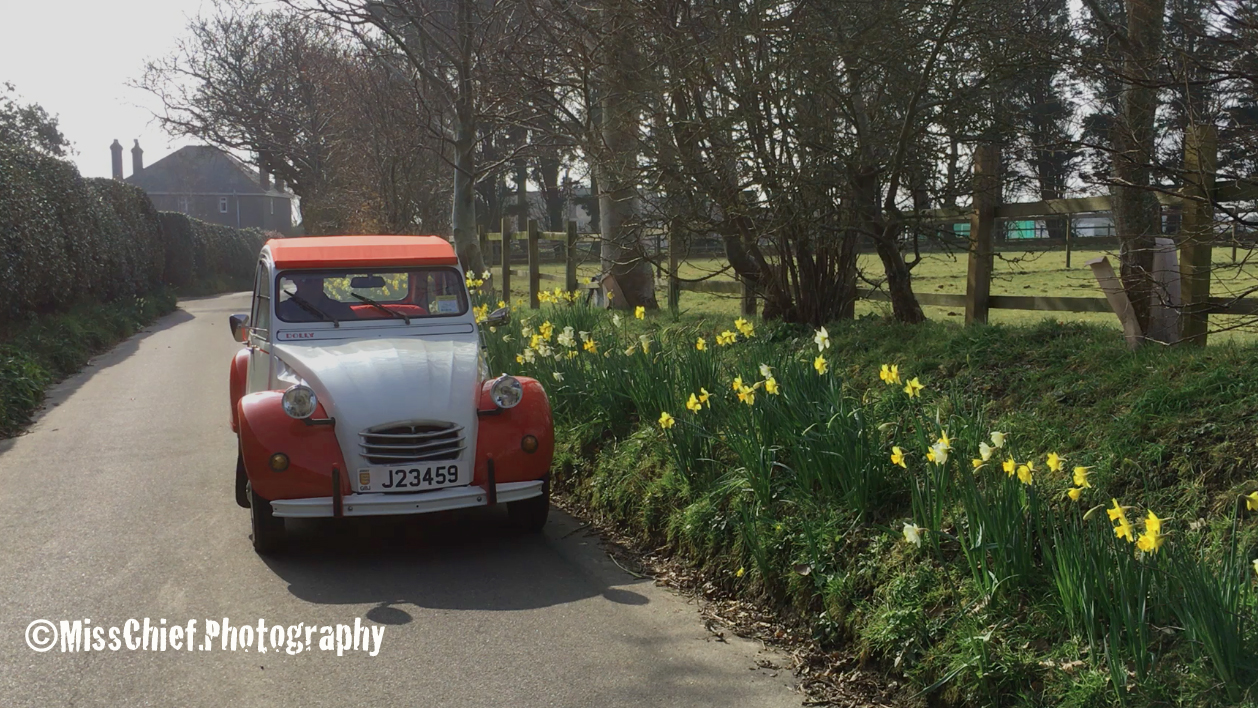 I have been cooped up under my tent’s canvas for about a month… in fact since the February 2cv de jersey Club run….  Booooring ! a serious lack of fun, oh I know there has been some excitement (sort of) as more big storms hit the Island. But, to be honest, they are so frequents that it has become boring. Hardly wort mentioning now that the garage is loaded down and not moving any more.

I even missed the March club outing! How dare Murielle take Chris away for a long week end on the exact week end of the club run?!? I know it was mother’s day and she wanted to spend it with her daughter in London, but I am supposed to be the special one!  I was livid! And to top it up, she only just came and said hello every morning this week before jumping in the ZX… It looks like I’ve fallen out of favour! 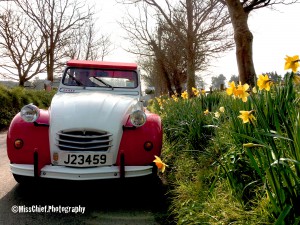 Let out at last…

Not sure what got into Murielle this morning,  might have been the sunshine peeking through the clouds, but after her household chores she actually started my engine. I was so fed up of being static that I actually didn’t complain and started within 5 minutes. (Not bad after sitting pretty for over a month). She asked Chris to drive and jumped into the passenger seat. And off we went. Chris took me though the back lanes, bordered with daffodils, Murielle had to stop the car, and get her iphone out to snap a few pictures. 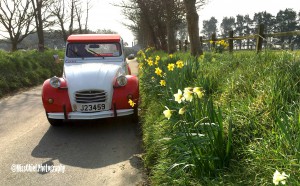 However…. this particular lane was quite busy and she had to run a few times as cars were coming from the other direction and Chris had to reverse me, move me forward, reverse me…etc… I was laughing inside, what a carry on, and she only managed 4 shot, poorly framed…  revenge is a dish served cold 🙂

The short drive took us to the open viewing of a house for sale, there was a double garage … Yippeee looks like they are looking for something where  I can have a proper home…. I’m still dreaming of a heated garage, oh that would be so lovely. 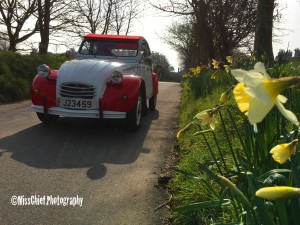 They were tight lipped about what they thought of the house when we left, so I don’t know what they are going to do about it.  I think they knew I would blab if they talk inside of me so I drove them to the Watersplash so they could discuss it over coffee.

I was patiently waiting for them to come out when I saw Scarlet parking a few cars away from me as I was already surrounded by other admiring cars. (yes I do have an automotive fan club, I am just not bragging about it all the time).  A quick hoot hello to Scarlet and I resumed my impatient wait… knowing full well that now that Helen and Debbie were there too, they might meet up with Murielle & Chris and the wait would be longer. And guess what ! They did make me wait longer!

Then it was time to go home with a small detour via the shop, it was an all too brief outing, but an outing nevertheless, I guess I should be happy but as Faithless would say … I want more !