Friday evening 43 cars from the 2cv club de Fougeres (FF2) drove out of the St Malo ferry and headed to town for the night. Of course, Murielle having liaised with them over the last few months knew they were coming… However she kept this very quiet and never told me! Sneak!

So imagine my surprised when my cover was lifted off me on a Saturday and Murielle dragged Chris out of the house before squeezing herself behind the driving wheel…. Intrigued, I started at first crank of the key in the ignition. 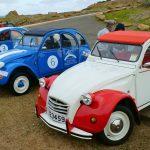 What is going on? General direction: Corbiere, imagine my surprised when I saw about 10 French 2cvs and a French Amy parked at the top whilst their owners were enjoying the views. Murielle drove me all the down to the bunker to meet the organisers of the French trip. I must say that I paraded very proudly as the group of French men congregated around me, saying how pretty I was, fawning over my paintwork. Meanwhile, my owner was getting drunk on a glass of white wine (lightweight)… Chris, as ever Mr Sensible, stayed away from the booze and took the keys of Murielle (Phew I was getting worried). Anyway, I much prefer Chris’ driving, he is more adventurous than Mrs Cautious… 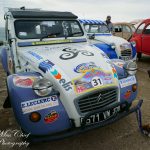 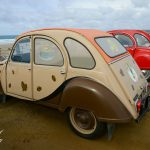 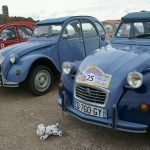 I led the convoy of 2cvs to the car park of the Watersplash to get rid of the humans for a while, and whilst they disappeared for a re-fuel of coffees, I managed to get a chat with my French cousins, telling them how to get into mischief. Looks like one listened to me and refused to start, having to be jump started… good one ! At the Watersplash, we got invaded by lots and lots of scooters & riders who were also on the rampage on the island… Exciting times for Jersey! 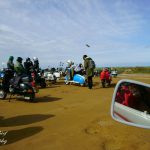 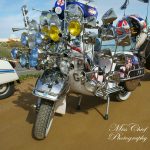 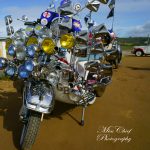 I very proudly took the lead again all the way to Grosnez castle, slowing down at Les Saline so Murielle could say hi to her friends who were on the side of the road… No one had told our visitors that cars were not allowed to park on the Beach and I spotted 4 of my cousins sunning themselves on the beach whilst their owners were tucking in some lunch…. 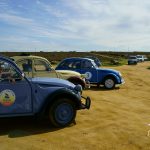 I made it up L’Etacq hill for a very quick stop at Grosnez as the wind deterred any exploration of the ruins, my followers were filing nicely behind me as we left Grosnez, on the way to Greve de Lecq to have lunch. 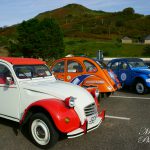 And when I arrived there, I had lost them, all my followers had abandonned me to have lunch on the side of the road… I felt so unloved, Chris parked me next to other French 2cv and took Murielle for a very expensive sandwich lunch in the Greve de Lecq cafe, between you and me I don’t think they will go back there in a hurry….My followers then re-appeared to join them hurray!

But then, my excitement was cut short, instead of carry on touring with the visitors, Chris & Murielle took me home (killjoys) as they were feeling a bit tired, so 4pm, I got home, grumbling all the way back…. It’s now killing me, but I must admit it, bu they were probably right to do that as it started to rain 10 minutes after we returned, and by that time, the cover was back on so I will try not to rust too much. 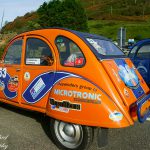 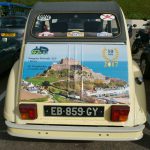 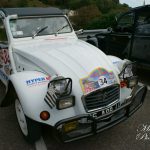 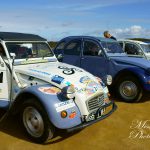