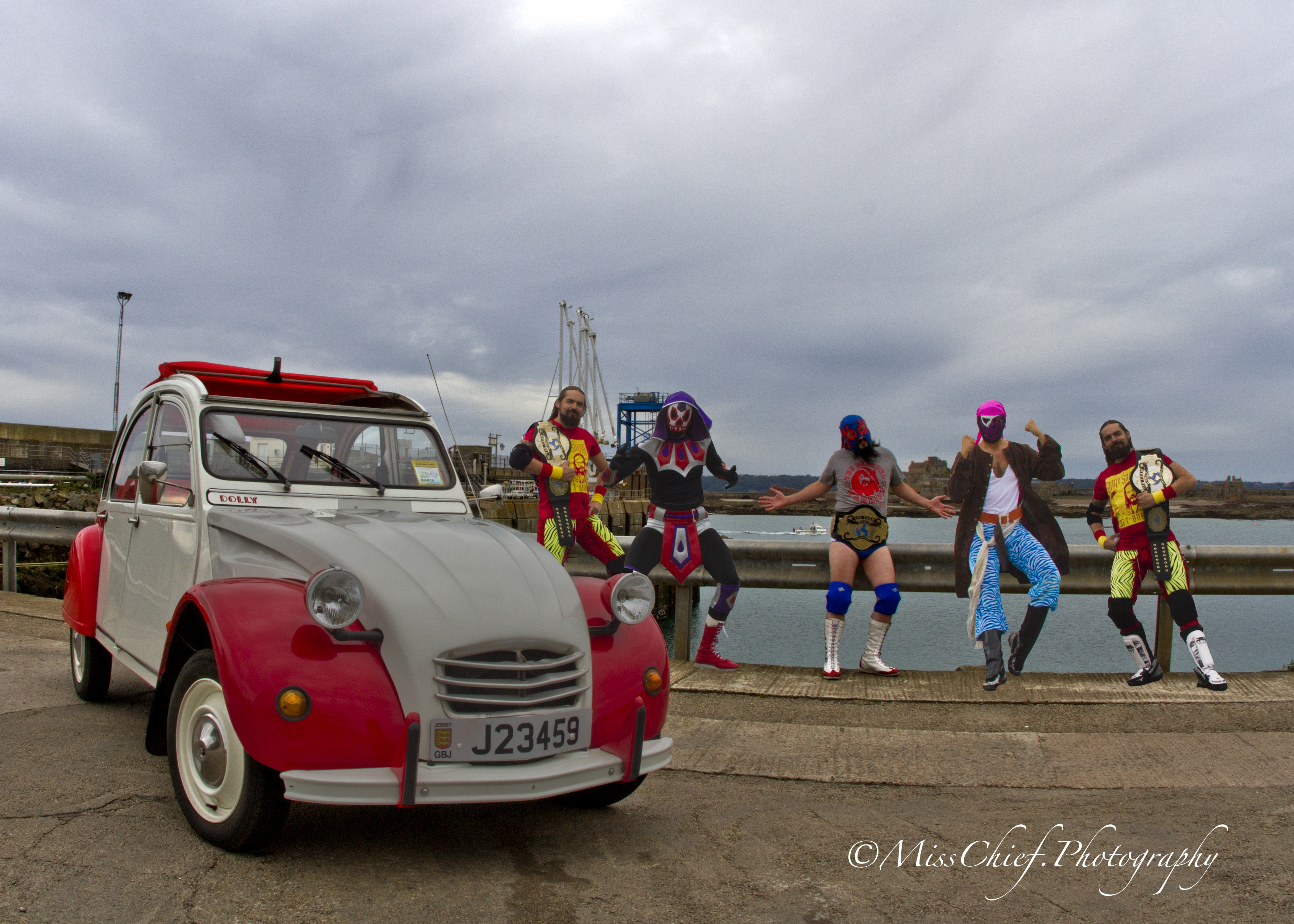 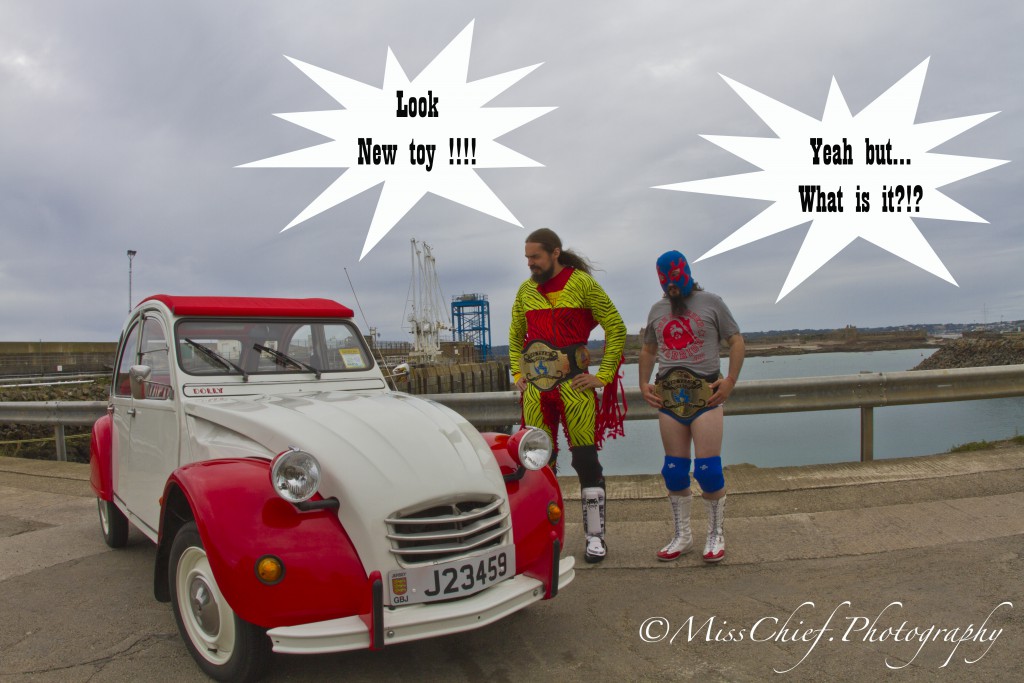 Murielle has lost the plot, she decided that I should be introduced to some members of the Channel Island World Wrestling team….. I was a bit dubious at first, well OK they were very brawny but not sure about the brains department…. they didn’t seem to know that to do with me !!! 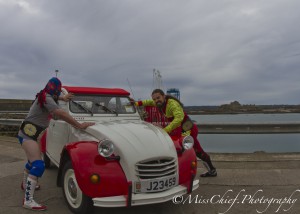 Well I shouldn’t worry about that, after all Murielle has the attention span of a gnat and I manage quite well round her…. So doing something with those guys should be easy enough.  (one they stop trying to push me about, after all I’m not a push over ! )

Murielle just stood back whilst the gentlemen introduced themselves, they were, I’ve been told the current tag team champions of the Channel Island World Wrestling : 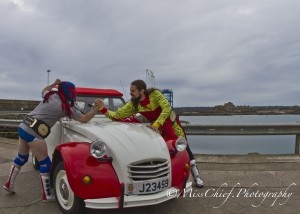 So we got acquainted over a little bit of friendly arm wrestling over my bonnet, with yours truly as a referree…. It was a draw, no winner this time!

I am warming up to those guys, they’re not so bad, actually no, they are really good fun to be around. If Murielle carry on laughing like this she’ll wet her pants!!! 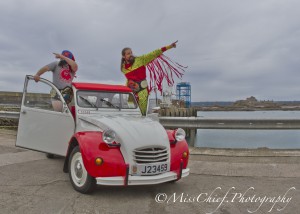 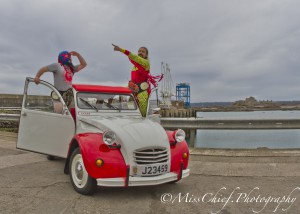 Now that the arm wrestle is over, they’re not so shy anymore and decide to explore my innards and see how useful I can be as a platform to look out for those green meanies, the Guernsey dirty cheaters of the wrestling world… Thankfully none were spotted this time.  But Dirty South spotted The Buccanneer Megabyte Jive descending from Mont Bingham to replace him as a look out.

What a rude boy ! Didn’t even ask, just climbed aboard like if I was his ship… Grrrr 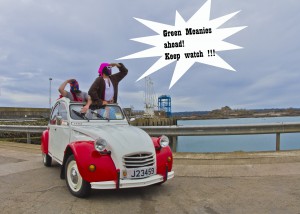 Oh well, at least he kept a look out for the meanies… that is until he got bored. He then began to pick on JVY and started to wrestle him inside me…. EEEK !!!! me a dainty classic with sweaty wrestlers attacking each other inside me… 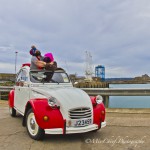 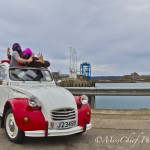 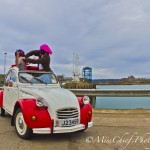 And Murielle was as useful as a chocolate fireguard, she was laughing too much to pull them off… Enough was enough, I like JVY, and I didn’t like the fact that The Buccanneer was trying to get his mask off, upset me, so I through a wobbly and activated the eject button. Off Course, Murielle conveniently forgot to press the camera shutter as he flew over the bonnet… Like I said she is not very good ! 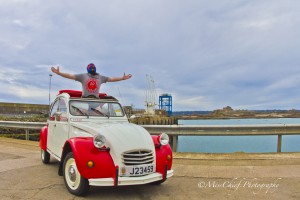 JVY looked well pleased to be the sole occupier of my lovely red seats !!!!

That didn’t last long though as one of the meanies arrived, the Delicious Concorde Adams … Otherwise known as the Chicken in the Channel Island World Wrestling because he only picks on smaller wrestler… And guess what JVY is smaller than him,  Dirty South was nowhere to be seen and the Bucanneer was  in a horizontal position unable to move… 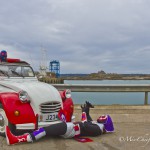 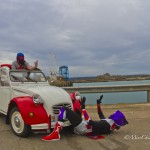 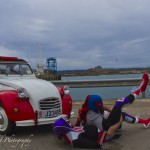 JVY was on his own. What could I do? Someone had to help him and Murielle was hiding behind her camera, looking the other way as the cars that kept going round and round the industrial estate to look at what we were doing… I took matters in my wheels (can’t expects humans to act rationally after all) and gave Concorde a slight bump, enough to wrestle him to the ground. JVY helped a bit with the steering …. but just a little bit mind you ! 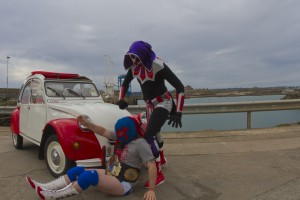 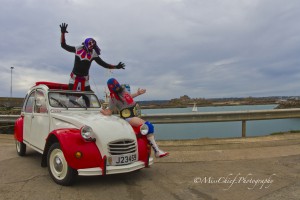 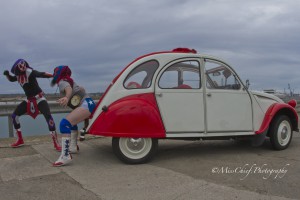 Then JVY raced out of the car like a bat out of hell and wrestle Condorde to the Ground… without my shell to protect him, the situation changed and a full wrestle show unfolded around me!

It was rather exciting, what a way to spend a Sunday afternoon, this was the most excitment I’ve had in a looooong time !

Since I couldn’t do anything else to help JVY, I decided to hoot, and hoot and hoot until my call was heard… and Finally, Dirty South came back running to the help of his tag team partner, but this time Concorde Adams was so tenacious and hard to pin down that Dirty South had to clone himself.. It was magic ! Wow, I’ve never seen anything like this happening! 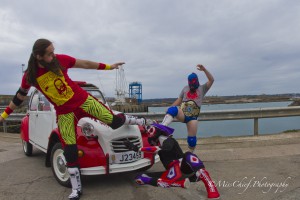 They finally made mince meat of Concorde Adams and we all posed for the hall of fame afterwards…. Wow, I had my picture taken with part of the wrestling team! I’m gonna be famous !!! May be i’ll be ask to join the team and get in the ring at the Merton Hotel… Who knows they’ll need to talk to my manager! 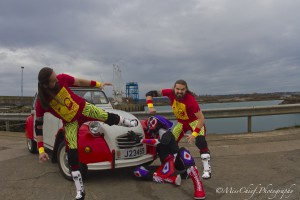 Needless to say, Dirty South, you are my new hero… much better than that thing with 4 wheels and cheeky grin  in Carz… what was its name again? I’ve forgotten !!!!More pictures of the afternoon available on MissChief Photography website