May 08, 2016 2cv Citroen, lifestyle, photography Comments are off

I’ve heard on the grapevine that Jersey has had a very tumultuous relationship with France over the centuries, belonging to the French one day and opting to belong to the UK the following day as religious persecutions were taking place in France. Later on building coastal fortifications (Martello Towers) in case Bonaparte’s troops decide to show any interest in this little rock…. Now of course, they welcome the French invaders with money in their pockets that come and shop in town looking for a taste of Britain on their doorstep.

This week, Murielle & Chris were welcoming Murielle’s parents, Marc & Genevieve who had come for some family time. Which means, I was kept busy transporting all these people playing tourist. I should have joined the union and ask for a pay rise as I was carrying a double load! 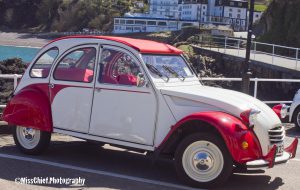 Lovely weather on Saturday as Murielle had refrained from singing for a while, so everyone piled into little me to go for a drive. Marc & Genevieve had to fiddle with their seat belts a bit and adjust them. Me thinks, that since I’ve seen them last year they must have put a bit of padding round their middle as I haven’t had any passengers since them…

Chris drove me to the North coast and I soon glided down the hill at Bouley Bay, trying not to 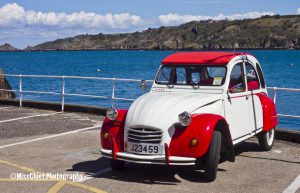 shake my cargo too much, and everyone know this hill is full of bends 🙂 Time for a photo opportunity at the bottom, and the scaredy cats decided to stretch their legs instead of having their picture taken with me! Well it gave me the opportunity to show off my new eyelids, that Genevieve had brought for me (thanks Grandma!). Don’t I look pretty in them?

Going down the hill was a breeze, going back up the hill, was more challenging with a full 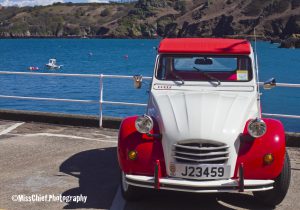 load… But I did it, second great all the way (phew!). Now, I hope Murielle doesn’t enlist me for the next hill climb event up that hill, I don’t fancy trying to do it at full speed….  I made it up the hill out of breath and grumbling…

Instead of heading towards home, we went further East and stopped at Gorey for an ice cream, and they didn’t even offered me one! the cheek of my humans, I do all the work and no rewards…

Ice cream over I decided I had done enough for the day and drove everyone one home, feeling 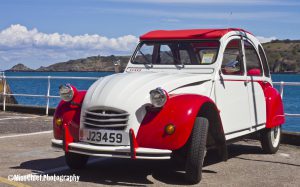 sorry for myself. Having been promised a wash and shampoo, I was looking forward to getting cleaned. And waited I did, for a few hours as Murielle had decided there was too much sun out to wash me and didn’t get the bucket out until after dinner. I don’t feel number one any more! I guess she redeemed herself a litlle by giving me a full wash and body shine, ooooh that felt so good !

Sunday was the day of the club run, as usual, it was very exciting to get with my sisters and their owners. Murielle made sure Marc & Genevieve were sitting in the back and ready to go by 9:15 am to be on time in St Clement.

We all looked very smart as we snaked on the roads from East to West and parked at the Poplars to let our human partake in their monthly ritual.

Monday was the annual boat show and my humans decided to show me off and take me to town, they parked me by the old marina on the side of the road as a car was pulling out of a space when I was arriving. How lucky was I? Not so lucky as there was a big pole in front of me spoiling the picture opportunities… 🙁

My humans (all 4 of them) went for to have a good look around and dream about being on boats they can’t afford, I patiently waited for the time to take them home. I smiled and preened myself for passers by…. 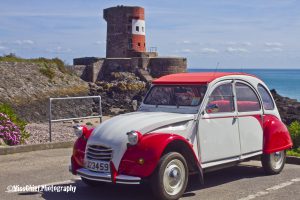 Tuesday, Chris went back to work so Murielle got back behind my wheel. She decided to take her parents for coffee on the East side at Archirondelle. The car park was nearly empty when we arrive which mean I could have my picture taken. I raised my eyelids and put my best side forward, shining for the camera.  My humans then went to sit on the terrasse of the cafe, the first table next to me as Murielle didn’t want me to feel too lonely (as if I can’t entertain myself). 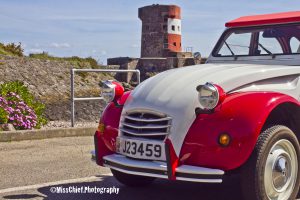 It was so peaceful there, I nearly fell asleep. I perked up though when the chef came out to admire me, telling me how beautiful I was and asking Murielle if I was for sale. She had the cheek to say that if he offered the right money she might consider it!!!! I made her pay for that later…  He finally went back in and a few minutes later, the chap that takes the orders came out to admire me too! Oh I like going there if this is the effect I have on people there… I do like a bit of ego boost every now and then. 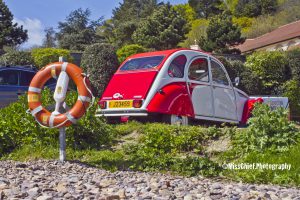 My humans decided to stay for lunch since I was enjoying myself. Whilst they were enjoying their food, a young couple came up from the beach. The guy turned around me 4 times! and looked inside me through the windows, I got the feeling he liked what he was seeing (well how could you not like the awesomeness that I am?). Unfortunately, I didn’t have the same effect on this girlfriend and she turned her back to me, tapping her foot on the floor with impatience to drag him away from me. Not fair… he left me to go with her.

When it was time to go, I climbed the steep hill leading back to the main road and I must say that Murielle did a perfect hill start! Even I was impressed and it takes a lot to impress me…

Wednesday, guess what, we headed East again, I like going East, I am popular there… I took the humans to the Gerald Durrell widllife park.  Murielle decided to come home via the north roads instead of through town because of the traffic. When turning right at the nasty Trinity crossing, she was, for once, being cautious, and it paid as the van that was in front of us lost its trailer. If I had been going faster, my beautiful bonnet might have needed plastic surgery! Phew, that was a close call!

Thursday, the humans stayed West and went to the Watersplash for coffee, and Marc got his baptism by Seagull poop… Whilst Murielle went to place the order, Marc & Genevieve had chosen a table on the outside, a seagull swooped by, nearly plucked some hair from Genevieve’s head, decided against it… and instead pooped on Marc’s sleeve ! YUK !!! At least she missed his bald head… I wonder if this would have helped with hair re-growth? Needless to say the drinks were drank quickly and I was soon taking them home!

Well folks, it’s been a long week, and I am tired…  Friday, they left me alone and used their legs to walk to the Lavender farm and back. I can’t say I was disappointed, it was nice to have the day off… When can I sign to join the union?