Out of the garage at last

It’s been at least a month since my last escapade, so I couldn’t believe it when the garage doors opened, disrupting my hibernation sleep. Hasn’t anyone warned Murielle that disrupting a hibernating risk could be dangerous?

Wondering whether to be spiteful and staying put and going for a ride to stretch my wheels, I decided that, perhaps, it would be better for my health to go out for a stroll. So it only took 3 cranks of the key to start me up. The first 2 because I was thirsty and needed a little bit of juice to get going.

A bit grey today, and it’s not the first Sunday of the month, so I am wondering were we are going. Now that Murielle works Sunday morning, I am missing some of the monthly get together with my sisters.

The fill up station, the Co-op En route was our first stop today, early enough to be completely empty, so I chose my pump carefully. A wise move there by Murielle as I was getting pretty dry and needed to fill my tank.  Tank filled, she went to pay for the bill whilst I was making eyes at the till attendant from afar…. I still got it guys, he couldn’t help telling her how much of a pretty dolly I am and how much he liked me 😍😍😍.

After a quick drive through town, hampered by the traffic lights along the avenue who kept turning red (incidentally, I burnt a red Porche at the traffic light grand prix…. take that Sport car, the old grannie’s car was faster than you at the start 😛), a grinning Murielle drove me to our stop. Green Island car park.  There she stopped and got her kindle out and stated to read, what the heck is happening?!?

So I am sitting there thinking, is that it?  And just before I start getting grumpy, I hear the sweet sound of a 2cv engine, and hey presto here is the red and white car with no name who quickly park next to me.  Then they all arrived, my partners in crime, Scarlett, Millie, Celeste, and a new one, Blanche….  Whilst the human are plotting where they are going to go for hot beverage, we decide whose turn it it s to misbehave…. 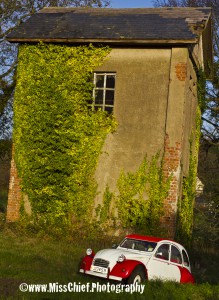 The humans asked Millie’s driver, Debbie to take the lead of the convoy. And to start with, we had a leisurely drive through the Eastern lanes. Only a few small hill starts, nothing to worry Murielle about too much as she hates doing them. Me I love them, they stress Murielle out so much it is hilarious. She is such a short ass that she can’t reach the hand-brake without taking her seat belt off, and then has to put it back on one handed… It is really entertaining to watch 😀.

After a few sedate lanes with no dramas, Debbie & Millie upped the anti and the convoy ended up going down a very, very, very steep hill, I am in second gear, Murielle is stand up on my brakes saying under her breath,  “please don’t stop in front of me, I won’t be able to stop Titinne” over and over and over. I wished I’d been able to record it or film it…. Gone was the goofy smile, she now started to look worried….

And guess what?!? What goes down must go up…. the climb back up the hill was more than steep. I am following Millie at a safe distance, who quickly diminishes when she starts slowing down. Inside my cab Murielle is shouting, “go on Debbie, faster, put your foot down. Put your foot down, don’t stop…. Oh NOOOOOO… please don’t stop….”

And that’s when the event of the day took place, our lead car Millie, decided it was time for her to misbehave and she stopped, right before a bend, up hill, in true Titinne style, she stopped. The apprentice is learning well…. She decided to jam her hand-brake and Debbie couldn’t start… The man trap worked again as 2 of the men in the convoy got out of their cars, tickled Millie and gave her a push up to help Debbie start.

After doing an outstanding hill start, I followed up and the other did as well… with Jo in Celeste giggling and saying ” I bet Murielle didn’t like that one bit”. She is right, Murielle did not enjoy… All I will say is well done Millie, you did me proud 😀

Millie then took us through easier lanes all the way to the cafe where the humans dismounted and congregated round Debbie asking why she went up that hill, and a big phew that she had been able to start Millie.  They all laughed at Murielle as they know she hates hill starts, I only hope she hasn’t been put off going out with the group as I like meeting with my sisters….  Anyway, time to go home and resume hibernation.